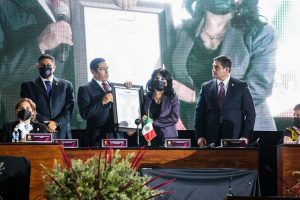 MEXICALI, B.C.– Last night a solemn session and oath of office took place for Mayor Norma Alicia Bustamante, as well as the members of the city council that will join her during her administration for the next three years, in which the 24th City Council administration was officially installed.

The event took place on the quad of the Municipal Palace, which was enlivened by regional and folk dance groups, a jazz recital, as well as by the music band from the second military region. The members of the council were present, as well as the former mayor of Mexicali and current governor-elect, Marina del Pilar Ávila Olmeda. In the middle of the event, the Mayor took the opportunity to request a minute of silence for the recent death of Xicotencatl Leyva Mortera, former governor of Baja California.

The mayor stated: I want to tell you that from our government we are going to work for our municipality and its people without distinction, only thinking about the common good.”  She expressed her gratitude to those who have accompanied her in her career, as well as to Marina del Pilar Ávila for her support. “The commitment that I make tonight, I know it is enormous.  It is to continue the upward path of transformation that leads us to be that municipality, that Mexicali we all want, “she added.

Bustamante, she said, will work with her council to be the most transparent municipality in the state, that is, clarity in the management of spending and public resources. She added, it will be an austere administration, in which expenses will be reduced and there will be no waste. Thus, she assured them they will establish four axes: Safe and Peaceful Mexicali, Wellbeing for All, Mexicali Grows and Governing to Serve.

Regarding ‘Mexicali Seguro’, she commented: “From now on, there are hesitations and with all the conviction, we will implement a comprehensive plan so that exists (…) a Safe and Peaceful Mexicali”, this addressing by the causes that generate violence and crime continuously working with the state government; she highlighted the importance of the culture of prevention and shared that vigilance will be increased, as well as response times, mainly in areas where there are more crimes.