Breaking News
Home / LATEST NEWS / NO TO THE MILITARIZATION OF THE COUNTRY: GINA CRUZ

NO TO THE MILITARIZATION OF THE COUNTRY: GINA CRUZ 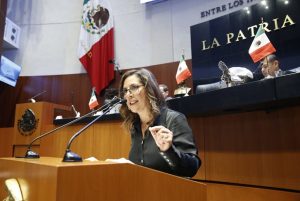 The Senator for Baja California, Gina Cruz Blackledge, stated that militarization is not the solution, the security strategy of this government has been a profound failure, and support must be given to strengthening the state and municipal police, which today lack the resources to confront the criminals.

The foregoing, the discussion in the Senate of the Republic, of the presidential initiative to integrate the National Guard (GN) into the Secretariat of National Defense (SEDENA), which has already been approved by the legislators of Morena and their allies in Congress.

Gina Cruz said that what the official majority would approve, submissive to the demands of the National Palace, is a new violation of the Mexican Constitution, the mandate that the National Guard must be civilian in nature is clear, and the military power must be subordinated in at all times to the civil authorities.

“More than 131,000 deaths so far this six-year term is irrefutable proof that this government’s security strategy is a resounding failure, which is why the president has already changed his mind because he recognizes his failure.”

With the unconstitutional presidential proposal, it is intended that the military are from the barracks and take charge of tasks for which they were not properly disturbed, in addition, it will only wear down a noble, patriotic, loyal institution, which has always been at the service of the nation and that has all its greatest recognition.

However, now the Army is assigned tasks beyond its nature, such as the construction of an airport and a train, or the control of ports and customs, asserted the legislator for National Action.

The possible violations of human rights, as well as the excessive use of force, threaten citizens who today have to defend themselves from an overflowing crime that governs large territories of the country, he said, but we must not forget that it is the responsibility of the government guaranteeing security, as mandated by the Constitution.

Gina Cruz said that in the discussion carried out in commissions, it was clear that those who defend the presidential proposal do not have solid legal arguments, they are only based on occurrences fed by the empty speeches of the National Palace tenant.

“Those who criticized yesterday that the Army was in the streets, today defend its presence as the only alternative to face the insecurity crisis that this government, with its very mistaken security policy decisions, has escalated to a level never seen before.”

The resources for security are managed in the dark, she said, the civil police have been weakened, such as the municipal and state ones that today are without resources, to face insecurity.

“The violence that we are experiencing today is the daughter of this government and not of neoliberalism, because this government, to this day, has not designed a consistent, comprehensive and technically founded strategy to pacify the country, instead, the absurd strategy of hugs and not bullets, it has turned Mexico into a cemetery and has mourned tens of thousands of Mexican families.”

The fault lies not only in the past, but she also asserted, it is time for the federal government to assume its responsibility for supporting a failed strategy and for ignoring ideas that could well put them on the path to peace that Mexicans want.

Gina Cruz explained that militarization is not the solution, the senators of the majority who say they listen to the people, ignore them, lie to them, have not listened to the mandate of civil society that they undoubtedly despise, they are Mexicans, that even demonstrated in front of the Senate of the Republic, against what they would approve.

“Society today claims and condemns this evil militaristic force, which can usher in a new era of instability and divisions.”