No End in Sight for Government Shutdown 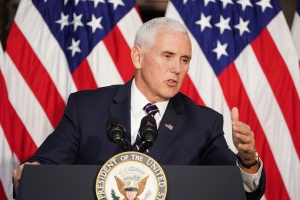 Those were the remarks of Vice-President Michael Pence recently about the government shutdown that began last year and shows no signals of ending soon. President Donald Trump has said time and again that the U.S. needs a wall for border security.

The government shutdown is affecting 800,00 federal workers who are working without pay since Dec. 22. The Democrats took control of the House of Representatives and will most likely create a bigger showdown between the Democrats and President Trump.

“The Shutdown is only because of the 2020 Presidential Election. The Democrats know they can’t win based on all of the achievements of “Trump,” so they are going all out on the desperately needed Wall and Border Security – and Presidential Harassment. For them, strictly politics!” President Donald Trump recently Tweeted.

The wall has been the central focus of his rhetoric as President since his campaign making illegal immigration the focal point of his campaign that fired up his supporters.

“Mexico is paying for the Wall through the new USMCA Trade Deal. Much of the Wall has already been fully renovated or built. We have done a lot of work. $5.6 Billion Dollars that House has approved is very little in comparison to the benefits of National Security. Quick payback!” Trump Tweeted at the beginning of 2019.

President Trump had a meeting with top Democrats and said he will not sign any bill without funding for the wall. Trump stated that he is prepared for the possibility that the government could be closed for months or even years.