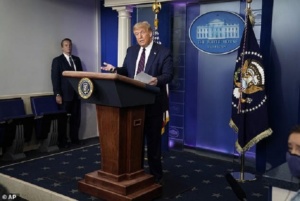 The White House offered a short-term extension Thursday of a $600 weekly unemployment benefit that has helped keep families and the economy afloat during the COVID-19 pandemic, but Democrats rejected it, saying President Donald Trump’s team failed to grasp the severity of the crisis.

Democratic leaders panned the idea in late-night talks at the Capitol, opting to keep the pressure on for a more sweeping bill that would deliver aid to state and local governments, help for the poor, and funding for schools and colleges to address the pandemic.

“Pelosi & Schumer have no interest in making a deal that is good for our Country and our People. All they want is a trillion dollars, and much more, for their Radical Left Governed States, most of which are doing very badly,” Trump stated on Twitter.

“The big issue that we have to do is to end this virus in order to open the economy, open our schools, and thrive and go forward.  They never have understood the gravity of it.  And since the – since the Heroes Act passed about 70,000 people have died, hundreds of thousands more have been infected and they wanted a ‘pause.’  And now they come back with piecemeal,” Schumer said.