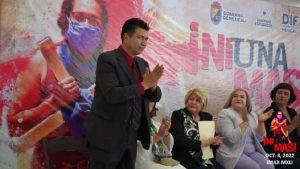 The Imperial Valley community gathered on October 1st to see the much-anticipated film by Roy Dorantes that addressed the topic of domestic violence.

A film made with no budget but with a passionate cast and crew, Dorantes was able to produce a compelling story about domestic violence with local actors from Imperial Valley and Mexicali. The end product is a film with a great story embellished with great audio-visual production that makes it his best work to date.

Dorantes is a creative mind and is always working on projects that send a positive message or creates awareness. His most recent work “Ni Una Más” made its debut at San Diego State University Imperial Valley Campus Rodney Auditorium and received a positive reception from those that attended.

This followed a screening in Mexicali where the event sold out and will be shown in other markets such as San Diego and Yuma, Arizona.

“Ni Una Más” (Not One More) has been the cry of women that are speaking up against abuse and feminicide in Mexico and the film highlights that movement in a time where hate crimes against women are on the rise and demand the government to take action.

Originally, Dorantes had planned to do a film about the impacts of COVID-19 in the Imperial Valley. In one of the casting interviews, a woman started talking about her domestic violence experience.

“I was so impressed by that and I said the heck with COVID let’s do this one. It just grabbed me. When an artist creates a project, he doesn’t select the project, the project picks him. In this case, it picked me,” Dorantes said.

“We are very pleased with the results and now the intention is to create noise on the subject to bring awareness that this is a problem,” he said. “In the United States, 4,000 women are murdered every year. It is our problem.”

“So in the movie, you see domestic violence happen from all three perspectives. But after we started shooting the movie took life on its own and we were forced to shoot scenes that we didn’t even imagine. The journey taught us where to go,” Dorantes shared.

One of the goals of this movie is to motivate women to be ready to protect themselves when they face a dangerous situation.

“I want to encourage women to equip themselves with some device for example a taser or a pepper spray. There is no reason a woman should die because they didn’t have a $25 taser. I want to raise consciousness so that women that have been victims of domestic violence are not ashamed to speak up and become a resource for other women that are currently victims and encourage the authorities to be tougher on domestic violence cases. A lot of the murders happen when the aggressive spouse is let go too early without proper intervention and he goes out to kill the wife because the anger is still there. These men that are arrested for domestic violence need intervention, they need counseling and they must not be let go because they will murder,” Dorantes said.

He also wants the government to have more programs to assist victims and survivors and give help to women that need to be in hiding. For his next project, Dorantes wants to do a film about the Mexican-American experience and what it meant for people at certain times.