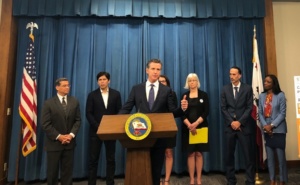 California Governor Gavin Newsom vetoed a bill that would have created a California-Mexico Affairs Commission.

The bill introduced by State Senator Ben Hueso arrived at the governor’s desk but was vetoed arguing that this would duplicate the mission of another agency that is working with Mexico.

In a letter sent to Hueso on Oct. 12, Newsom said that these are important goals that they have been working on, which is why he signed an Executive Order establishing the International Affairs and Trade Development Interagency Committee earlier this year that is chaired by Lieutenant Governor Eleni Kounalakis.

“The committee has focused on California’s relationship with Mexico and already taken steps to establish a formal presence of California in Mexico,” Newsom stated. “In addition to the work of the committee, the California-Mexico Border Relations Council, established in 2006, also serves as the central organizing body that coordinates Cross-Border programs, initiatives, projects and partnerships for the State.”

Newsom said that while he respects the intent of Hueso’s bill, this would duplicate efforts that are underway to reactivate the Commission of the Californias.

A letter was sent to the Governor recently asking him to support the creation of this commission. The only signee from the Imperial Valley was Luis Olmedo, Executive Director of Comite Civico Del Valle.

​“When Governor Newsom entered into office he gave his supporters a strong hope of leadership in which he would respond to border communities’ collapsed infrastructure. We believe he has not done that.,” Olmedo said.  “The Administration has repeatedly blocked border proposals, bills and most recently California Air Resources Board passed a border program and the Administration has not made it a priority for funding.  We need to hear a plan.  We can’t afford Newsom’s Administration to not prioritize the California-Mexico border region.”

The Imperial County Board of Supervisors endorsed the creation of the California-Mexico Commission months ago.