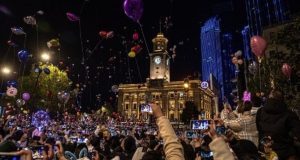 This New Year’s Day went down as one of the quietest ones in history.

While many people were at home celebrating with their families, many of the big cities around the world still had fireworks celebrations but without gatherings.

Restrictions were placed on New Year festivities around the world as many countries struggle to curb new spikes in coronavirus cases.

Fireworks displays and other public gatherings have been canceled from Sydney to New York. For the first time in decades, Times Square was closed to the public on New Year’s Eve. Instead, dozens of frontline workers and their families will be honored with spots near the stage.

Festivities are being particularly muted in Europe, amid fears over a new more contagious strain of the disease.

France has mobilized 100,000 police to break up New Year’s Eve parties and enforce a night-time curfew.

More than 1.8 million people have died of the virus across the world since the start of the pandemic a year ago. More than 81 million cases have been reported.

However, large crowds took to the streets at midnight on Friday in the central Chinese city of Wuhan, celebrating the arrival of 2021 after a year marred by a deadly pandemic that killed thousands there and required the city to be locked down between the end of January and early April.

As per tradition, hundreds gathered in front of the old Hankow Customs House building, one of the city’s more popular New Year’s Eve spots.

The festivities came 12 months after the World Health Organization (WHO) said it first received word of cases of pneumonia of an unknown cause in Wuhan, which later became known as the world’s first outbreak of COVID-19. A team of WHO experts are scheduled to arrive in China in January 2021 to investigate the origins of the pandemic.

Here in the Cali-Baja Mega Region, Southern California, is under a stricter stay-at-home order.

California has extended its strict stay-at-home orders in areas where hospital ICU capacity is rapidly dwindling, as the state’s governor warned residents to brace for a “surge on top of a surge” following the holiday season.

The state’s top health official, Dr. Mark Ghaly, said that southern California and the agricultural San Joaquin Valley still have effectively zero ICU capacity and that the state’s restrictions would continue longer there. California’s governor, Gavin Newsom, said on Monday that even with hospital admissions plateauing in some places, the state was destined to move into a “new phase” that it has been preparing for as it sets up hospital beds in arenas, schools and tents, though it is struggling to staff them.

The travel restrictions on the border have affected families from seeing each other during the pandemic but there were long lines seen of cars going into Mexicali that went past Jasper Road.