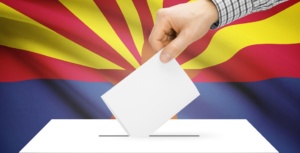 Governor Doug Ducey signed legislation last week that would allow Arizona voters to vote in the primary sooner. Voters will head to the polls on Tuesday in August. That’s three weeks sooner than the current measure.

Those against the bill say it would give too much campaign time for the general election, and that it has the possibility to inhibit those in the primaries from getting the amount of signatures needed to be on the ballot.

Supporters believe the additional campaign time to be a positive thing.

The 2020 primaries will take place on August 4. The new voter registration deadline will be on July 6, and the early ballots will be sent on July 8.

There are several other new election-related laws. Arizona voters can now fix signatures on early ballots. The new measure allows voters to fix the signatures two weeks before voting day instead of the current guideline of one week. Voters will also have five days after the election to do so. For other elections, the window to fix signatures is three days.

Source: ALL ABOUT ARIZONA NEWS