NEW UABC PRESIDENT IS SWORN IN 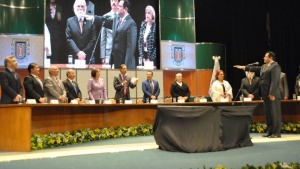 Dr. Daniel Octavio Valdez Delgadillo was sworn in before the Autonomous University of Baja California’s Board as new President of the leading educational institution of the state of Baja California for the period 2019-2023.

The new President acknowledged the great work of former President Juan Manuel Ocegueda Hernandez and said that in the face of challenges for uncertainty due to global changes, as far as possible, educational programs will be reviewed in order to solve the problems, following a policy of austerity. His term as President will be from January 27, 2019, to January 27, 2023.

Academic authorities, directors of schools, faculties and institutes that are part of the university, as well as former presidents, members of the university board and state, municipal authorities attended the event and offered him all the support in his new endeavor.