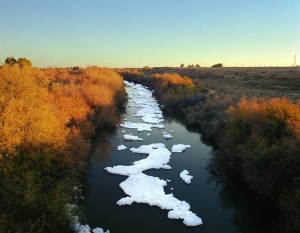 Monday, October 30, the City of Calexico, Imperial Irrigation District, and Imperial County will host a historic ceremony to commemorate the signing of a Memorandum of Understanding (MOU) regarding the New River Improvement Project (NRIP) in Calexico.  The event will run from 2:00 p.m. to 3:00 p.m. at Nosotros Park at the intersection of Kloke Road and Calexico Street.

The MOU solidifies a mutual agreement between the three aforementioned parties affirming priorities, goals and future maintenance and operation commitments related to the NRIP.  The NRIP was designed to improve the water quality in the heavily polluted New River as it flows through Calexico by installing a trash screen just downstream from the Mexico border; piping polluted water away from Calexico to wetlands and aeration structures for remediation; and replacing polluted water in the river channel with treated wastewater from the city’s treatment plant.  The New River runs from Mexico through Imperial County to the Salton Sea posing a threat to public health and hindering local economic development.

Officials from the California Environmental Protection Agency and the Regional Water Quality Control Board will also participate in the signing ceremony.  Attendance is by invitation only.  Media is encouraged to attend.