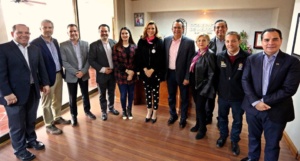 Mexicali, B.C.- At a meeting that took place in the office of the Mayor of Mexicali, Marina del Pilar Ávila Olmeda, Rodolfo Andrade Pelayo, took oath as the new president of the Mexicali Industrial Development Commission (CDI).

The City Mayor Marina del Pilar Ávila Olmeda highlighted the work carried out by the CDI, to promote the growth and expansion of economic activities in Mexicali, mainly in the industrial sector, in addition to working on the retention of investments in the different areas.

She indicated that, through this body, actions related to the growth of the commercial and service sector are also promoted, and all this is carried out to offer Mexicali families more and better economic opportunities.

For his part, Rodolfo Andrade, accompanied by the members of his board, assured that, by instructions of the Mayor of Mexicali, the body he represents will focus on promoting the arrival of public investment in Mexicali.

She indicated that, in conjunction with the Coordination of Economic Promotion and Development, in charge of Luis Alonso Vildosola, new strategies will be designed to generate the arrival of new companies, as well as greater offers for job development of Mexicali residents. The City Mayor was accompanied during this event by Rodrigo Llantada, Coordinator of the Mexicali Economic Development Council, as well as Armando Vizcarra, President of CDEM.