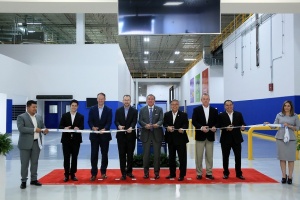 MEXICALI, B.C.- Strengthening national leadership of Baja California in the medical devices industry, the State Government led by President Francisco Vega of Lamadrid, through the Ministry of Economic Development (SEDECO), participated in the opening of Medline manufacturing plant, which invested 125 million dollars in the first phase and will reach 3 thousand jobs, making Mexicali one of the plants with the greatest projection for this company.

The Secretary of Economic Development, Carlo Bonfante Olache, who attended with the representation of the Governor of the State, said that the start of operations of the plant sends a powerful message of what is able to be achieved in Mexicali: attract a global corporation, adding the true spirit of community, vision of future, human talent, commitment and joint work to build development opportunities in the present and for the future.

Medline Mexicali belongs to the business of SPT (Sterile ProcedureTray) and its main focus will be the preparation, assembly, and storage of sterilized trays for surgical use, which will be distributed mainly in the United States.

“We hope that this good news has the echo it deserves locally, regionally and internationally, to reiterate that, in our State, we are many more who support the development and generation of employment sources. And it shows that Baja California was placed in the fourth position of the country as a recipient of Foreign Direct Investment (FDI) in the fourth quarter of 2018, according to data from the Secretary of Economy, “emphasized the Secretary.

Medline is a family business based in Northfield, Illinois, the United States, which over the years has positioned itself as the largest private manufacturer and distributor of medical supplies around the world. The company has more than 20 business divisions, distributes around 350 thousand different products, has about 18 thousand employees around the world and endorses 50 consecutive years of continuous growth.

The Municipal President of Mexicali, Gustavo Sánchez Vásquez, participated in the opening ceremony; the President of the division of SPT of Medline Industries, Jim O Brien; the Operations Director of Medline Mexicali Products, Guillermo Salcedo Ojeda; the Business Development Manager of Grupo Prodensa, Carlos Loyola; the Vice President of Operations of Medline, Jim Roos; as well as the Project Director of the SPT Division, Michael Cook.

In addition to positioning itself as a potential source of employment, Medline seeks to collaborate directly with institutions in favor of the community. One of its main focuses is support for working women, education and the environment.