New Mayor of Mexicali Outlines Goals for his Administration 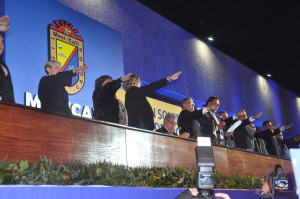 A new day has arrived for Mexicali as Gustavo Sanchez Marquez became the new Mayor of Mexicali. A special ceremony was held on Wednesday, November 30, where Mayor Sanchez and the Mexicali Council took oath of office for the three-year term that will end in 2019.

During his opening remarks, the new Mayor said he is ready to work on a government that is organized to serve the residents of Mexicali and a good manner.

“We are ready to serve Mexicali with lots of dedication because our city deserves it and because our citizens are demanding a government that is close to them.” Mayor Sanchez said during his opening remarks.

Mayor Sanchez said that his seven main objectives of his administration will be austerity in spending, improvement of public services, citizen participation, transparency and attack on corruption, better re-dimensioning public administration, healthy finances and evaluation of results. The new Mayor emphasized that there are challenging days ahead because of the financial situation but said that they will take steps to improve the city’s financial condition.