New Legislative Battle Looms Between the IID and Assemblyman Mayes 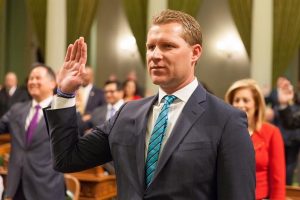 Assemblyman Chad Mayes has become the Imperial Irrigation District’s public enemy number one since 2019 and it looks like they will both enter another legislative battle to determine the future of the organization.

At the April 6th meeting, the IID Board of Directors voted to strongly oppose another Assembly Bill 1021 by Assemblyman Mayes. This bill would add three non-voting members to the IID Board appointed by the Riverside County Fourth District Supervisor who at this moment is none other than Manuel Perez, the former Imperial Valley representative in the California State Assembly.

It would also require the Local Agency Formation Commission for the County of Imperial and the County of Riverside to conduct and publish on the websites, by December 1, 2022, a joint study of voting rights and options for providing electricity in the IID service area. This bill has been referred to the Assembly Local Government Committee.

“They will be non-voting members in the IID Board but will have the same responsibilities as the other directors,” said Antonio Ortega, Intergovernmental Affairs Director.

This bill would require the membership of the board of directors of the Imperial Irrigation District to increase from 5 to 8 members, with the 3 additional directors being nonvoting members with all the other rights as the existing directors, and meeting certain qualifications.

The Imperial County Board of Supervisors also approved a letter opposing this assembly bill at their April 6 meeting.

This is not the first time IID and Mayes have a legislative fight with each other. Mayes introduced an assembly bill that would add more members to the IID board from the Coachella forever changing the balance of the board.

Assembly Bill 854 died in the rules committee at the California State Assembly since there was not enough support for the bill to move forward. The IID Board strongly opposed the bill that would have required the members of the IID Board to increase from 5 to 11 members with a majority coming from Riverside County.