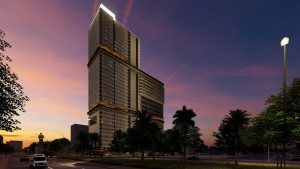 Offering the highest quality and medical experience to national and international patients in Tijuana, the Cosmopolitan Group – a leader in investment and real estate development – in alliance with Puerta de Hierro Hospitals – a member of the Mayo Clinic Care Network – announced the development from Cosmopolitan Health District.

The new medical complex ensures a new era for the health and well-being of the inhabitants of Tijuana, as well as its visitors; in addition to promising:

● A medical service focused on a high specialty with cutting-edge technology for national and foreign patients.

● Consolidate Tijuana as the capital of health tourism, nationwide.

● A medical district with the highest standards: safe and environmentally friendly, which will seek to achieve EDGE Certification (Excellence in Design for Greater Efficiencies).

● Comprehensive and inclusive design, providing the city with a solution building for the needs and lifestyle of Tijuana.

It should be noted that when starting operations, Cosmopolitan Health District will promote the generation of more than 2,500 direct and indirect jobs.

It is expected that by the year 2024 this complex will be ready, which is shaping up to become the benchmark for the high medical specialty and the meeting point for medical tourism within the state of Baja California, with an investment of 1,200 million pesos.

The building will have more than 50 thousand square meters of construction and will be one of the tallest in the city, located in the Zona Río financial district, six minutes from the International Garita and only 10 from the Tijuana International Airport.

● Strategic point north of the city, close to the border crossing with the United States.

● Connectivity with the most important roads in Tijuana, an area with the highest economic growth in the city.

● Surrounded by hotels, restaurants, financial centers, and shopping malls that add added value to the area.

The complex will have 150 medical suites and a long-stay hotel operated by Residence Inn by Marriot.

At the end of 2020, Tijuana became the capital of health tourism in Mexico, crowning itself as the medical destination par excellence for North American patients, thanks to the benefits in low costs of consultations, procedures, drugs, and surgeries (prices between 30 and 70% less).

Expansion of the supply of health services in the northwest area

Once the hospital is inaugurated, the health care gap between the states of Jalisco and Baja California will be closed, offering specialized services to surrounding cities and towns.

Similarly, the new Hospital Puerta de Hierro Tijuana will offer its wide range of specialties and services to patients from the United States, mainly from the states of California and Arizona who seek the best care at considerably more accessible prices.

Cardiology, neurosurgery, ophthalmology, cosmetic and reconstructive surgery, internal medicine, angiology, traumatology, and orthopedics, among many other medical specialties, will converge in a space designed for the maximum comfort of the patient.

A select group of specialists will be able to form part of this medical district, through a meticulous selection process that goes hand in hand with the institutional philosophy and commitment to excellence that characterize Hospital Puerta de Hierro.