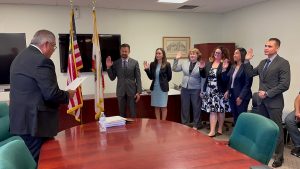 Imperial County District Attorney Gilbert Otero has a few months left in office but he is not wasting time and is working to fill up his staff with qualified attorneys that advocate for the public.

“Being a prosecutor is a noble profession because you are always trying to do the right thing,” Otero said. “Our job is to ensure justice and be able to represent the people of the state of California, it is an awesome task, we don’t take it lightly.”

Otero said these new attorneys are expected to do their work and be ready to represent the people. He said he is proud of the way they trained their attorneys so they can hit the ground running and gain experience.

Attorney Anna Sebastian is originally from San Diego and arrived at Imperial Valley as a recommendation since colleagues she worked with started their careers in Imperial County.

“The biggest draw coming to this office was the experience you get. They throw you into court right away and your learning on the go. You’re in court, you’re doing the work and that’s how you learn to become a prosecutor,” Sebastian said. “I’ve been with the office for six months but I feel I have gained experience that other prosecutors won’t be able to get in the next two to three years in bigger counties.”

Attorney Kevin Kelly has diverse experience in the law. Having worked with Judges locally he has a unique experience on how the judicial system works. He recently transitioned to the D.A. office where he was found the support of his coworkers in learning about the prosecution.

“It took a little bit of transition but they drilled us into being advocates for the victims and how to be prosecutors. I have the role down now and I enjoy being an advocate and working with the court, the judges, and the defense attorneys,” Kelly said.