New App Could Prevent Children From Dying in Hot Cars 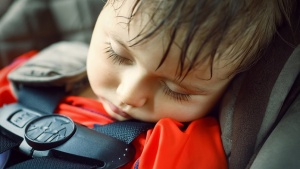 The rate of hot car deaths is increasing every year at a dramatic rate. According to noheatstroke.org, 749 children alone have died because of pediatric vehicular heatstroke since 1998. While the number of victims continues to grow, one Arizona dad has decided enough is enough.

Phoenix father of three Erin J. O’Connor has been working on a solution to this devastating epidemic. O’Connor has been hard at work to develop a solution that will help parents avoid untimely tragedy. Summer temperatures in Arizona can quickly reach between 104 and 107 degrees Fahrenheit in the summer. Combined with the fact Arizona rates fourth highest on the list of child deaths, it’s easy to see why O’Connor wanted to come up with a way to stop hot car deaths.

O’Connor has been “bothered… so deeply” that he knew he had to come up with a solution. Over the past eight months, he has funded an app that will hopefully stop any more unwanted tragedy.

The Backseat (which is available for free on the app store) is designed to sense when a vehicle reaches speeds of over 20 MPH. When these speeds are reached, the app lets out an audible alert in order to indicate it is active. Unless the app’s user taps an icon indicating there are no children in the car, the app will remain active in order to monitor the car’s speed and eventual stop.

Once the vehicle has stopped, the user will receive an alert within three minutes reminding them to get their children from the backseat. “It is a nice reminder that you may have forgotten your child in the car,” according to O’Connor.

If the user does not disable the alerts, the app will take more drastic measures. Within six minutes, it will send a barrage of texts and emails, set off an auditory alarm, and turn on the phone’s flashlight. If the user still does not respond to the app’s alerts, O’Connor states it will “give up on the user and seek outside help” by reaching out to a user-appointed alert team.

The alert team–which consists of three people assigned by the user to receive texts and email alerts in case of an emergency–will receive an alert message, the GPS location of the car, and the vehicle’s license plate information.

“If you have young kids, you need to get this,” says O’Connor. “If it saves one baby, one baby’s life it will be worth it.” He also notes that while he cannot promise the app will 100% stop you from forgetting your child in the backseat, it could mean the difference between a trip back to your car or a life-changing tragedy.

If you want to learn more, you can find The Backseat on the app store or go to www.TheBackSeat.net