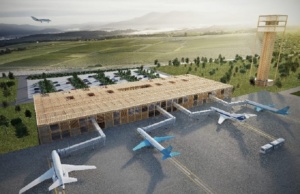 ENSENADA, BC, November 24, 2019.- The airport projected by the Government of Jaime Bonilla Valdez, between Rosarito, Ensenada and Valle de Guadalupe, will trigger tourism and commercial activities in the region, said the Secretary of Sustainable Economy and Tourism ( SEST), Mario Escobedo Carignan.

“The new air facilities will have all the technological and geographical advantages, to function as military and civil, in order to replace the runway of El Ciprés, in agreement with the Secretary of National Defense (SEDENA),” he said.

In that same sense, he stressed that it is planned that the construction of the airport is located in the area of ​​El Tigre or Chichiguas, and thereby attract visitors from Arizona, California, and Nevada, who like to make flights on weekends.

“They intend to develop the 365 hectares that Ensenada has facing the sea, but also which represents the most important project in commercial and tourist matters, marking a before and after for the Guadalupe Valley,” he said.

He also said that one of the issues on which they have to work on the continued promotion of Guadalupe Valley, without cramming it with tourist investment, to allow the valley to make its own vocation, which is viticulture, he remarked.

He added that this air terminal seeks to trigger shopping centers, hotels, and other services, but not within the valley which has prestige in wine production.

He anticipated that, for the moment, the most important part is that SEDENA has an airstrip with all the security and all the certainty, which is being analyzed by the armed institution.

Escobedo Carignan said that the planned aerodrome in Ojos Negros cannot be considered a reality since there is a concession granted to individuals, which does not allow certainty in what its future is.

Finally, the state official said that it is a high priority for the Government of Jaime Bonilla Valdez to work on the economic growth of all Baja California, and for Ensenada, there are several projects, which will be a very important advancement.