Neglected facilities in the pedestrian crossing to Mexicali 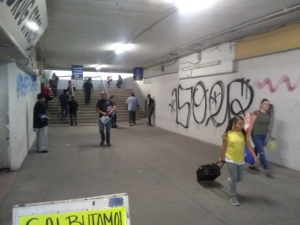 In spite of the recent efforts, which have been made to modernize the international crossing in the Downtown Zone of Mexicali, which leads to the west border port in Calexico, the conditions that exist in the vehicular crossing, contrast with the pedestrian crossing, where graffiti, people in street conditions, and little surveillance, abound.

Barely less than a year ago the new pedestrian crossing was inaugurated, highlighting an important remodeling of structures, especially when entering Mexican territory, with duly installed agents, and an inspection team, with wider spaces for circulation, as well as more lighting, and air conditioning.

However, once a person passes customs control, the road to the public road looks rather careless, and to some extent unsafe, since there is no police officer or authority that is guarding the area.

The area is invaded by graffiti, which gradually covers more walls, and more spaces, giving a bad appearance, for those who pass through the corridor, and even more at night, when the few businesses around close their doors.

On some poles, there are informative signs, which indicate that whoever is caught spray painting or vandalizing the area, will be arrested by the federal authority. Something that, apparently, has not had the necessary effect, to prevent damaging Mexicali’s image, and for those who visit this city.