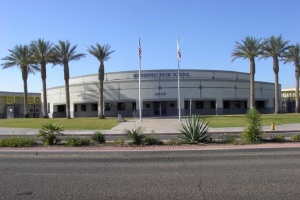 El Centro, CA.- During the first days of January, a citizen complaint was brought to this editorial office related to one of the most important days in the life of any high school student, resident of California: Grad Night at Disneyland.

The complaint denounced the disagreement of a group of parents for the management of places available for the so wanted graduates trip to the happiest place on earth.

A mother complained that her son’s high school, Southwest High School, had not warned her about the need to book in advance or at the beginning of the school year for her son to have a place at the graduation event that Disneyland organizes every year for all graduates in the state of California.

She told us that at the beginning of January when she was going to pay for her reservation, the person handling the trip said there were no more places and that her son could be put on a waiting list, which had 48 students already hoping to get called to attend the awesome graduation event. When questioned about the lack of notice, the event’s reservation manager said that everyone had been given notice to book on time before the venues were exhausted, however, several parents argued they were not notified by any means.

After seeing the huge waiting list, the mother asked if so many students waiting did not merit the rental of another bus so that everyone had the chance to attend. The person said there were no more tickets. However, Beyond Borders was given the task of contacting the theme park and a person in charge told us that tickets could still be purchased by the participating schools.

The high school promised to contact the mother at a later moment and argued that there was no budget for the rental of another  charter bus and that all the students on the waiting list in previous years had not complied with payments, so that was one of the reasons no other effort was planned this time to get more spots or transportation so the young students could go to Disneyland.

Upon receiving this response, the mother proposed to sponsor the bus for the 50 young graduates, if there was a budget problem, but the person in charge of the trip insisted that there were no buses available for rent.

The thing is that it’s not just about any day, it is an important event that happens only once in a lifetime of every student and everyone wants to go, an event that started in 1960, so the upset mother declared: ” They circulated some notices that were never sent to me by mail or in person in order to have been able to reserve a spot for my son to this important graduates’ night. Being his senior year in high school, I would not want him to miss the unique opportunity to attend, as I consider it important in his life. They said they would give me a call since the beginning of January and to this date, I still haven’t received any call.”

It is a pity that this number of young people interested and registered on a waiting list, excited to receive support or a confirmation call, miss the opportunity to attend an event that they will never be able to repeat in a lifetime.