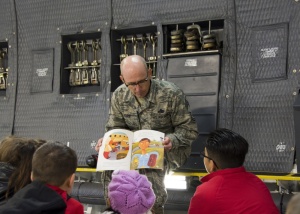 EL CENTRO, Calif. – NAF El Centro’s Child and Youth Program is scheduled to celebrate the Month of the Military Child with a parade of the base’s youth, from the CYP building to the main flag pole, April 19th, 2017 beginning at 9:15 a.m.

The children, ages three-months to 18 years old will walk or bike along with parents and staff to honor military children, joining CAPT Brent Alfonzo, the installation’s commanding officer who will deliver a few remarks.

This special event will stress the importance of providing children with quality services and support to help them succeed in their mobile lifestyle.

The month of the military child is part of the legacy left by former Defense Secretary Casper Weinberger.  He established the Defense Department commemoration in 1986.

“Since April is the optimal time to reflect on the well-being of children, we are able to further heighten awareness around child safety by celebrating the month of the military child.  The celebration reinforces DON commitment that all children deserve to be safe, nurtured, and cherished” said Ray Mabus, former Secretary of the Navy, in a written statement released January 19, 2017.

Some additional information on this event may be found at: http://www.militaryonesource.mil/efmp/news?content_id=295810

This event is not open to the general public and is intended for base personnel and their families.