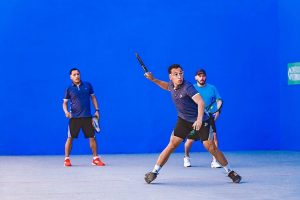 Thanks to the collaboration of the private initiative and local sponsorships, a Frontenis tournament was held in San Luis Rio Colorado, Sonora thus marking a new attraction for the region that brought the best players.

The tournament was possible thanks to the efforts of Israel Reyes, Alberto Rios, and a great team that made this possible.

All these players managed to reach the final instances.

Frontenis is a sport that is played in a 30-meter pelota court using racquets (a tennis racquet or a similar frontenis racquet) and rubber balls. It can be played in pairs or singles, but only pairs frontenis is played in international competitions. This sport was developed in Mexico around 1900 and is accredited as a Basque pelota specialty.

In frontenis, one player of the pair hits the ball with the racquet toward the front wall. The ball must strike the playable surface of the front wall and return to the playable area of the court. The opposing players must strike the ball before it bounces a second time on the floor of the court. As with other racquet sports, the best stroke is one that the opponent cannot return.

For many years, frontenis was played only in Mexico, Spain, Argentina, and a few other countries, but now it is played in approximately eighteen countries worldwide.