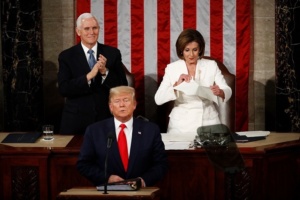 President Donald Trump gave the State of the Union Address that ended with the House Speaker Nancy Pelosi tearing the speech Trump gave.

In an action never seen in the State of the Union, Pelosi tore down the speech moments after the President finished his address drawing heavy criticism against her from citizens and elected officials.

When asked why she took that action, Pelosi told the media that “it was the courteous thing to do.”

“Disappointed to see Speaker Pelosi rip up the speech that mentioned lives we’ve lost and heroes we celebrated at the SOTU. No matter how you feel or what you disagree with, remember others are watching. This was unbecoming of someone at her level in the office,” Former U.S. Ambassador Nikki Haley said.

Newt Gingrich, a former speaker of the house during the Clinton years, suggested that action be taken against Pelosi.

“As Speaker of the House for four State of the Unions by a President of the other party, I am disgusted and insulted by the viciously partisan action of Nancy Pelosi tearing up the speech. She isn’t clever or cute her childishness insults our American traditions -should be censured,” Gingrich said.

Nancy Pelosi defended her actions: “The manifesto of mistruths presented in page after page of the address tonight should be a call to action for everyone who expects truth from the President and policies worthy of his office and the American people.  The American people expect and deserve a President to have integrity and respect for the aspirations for their children.