NAFTA renegotiation will be very soon

Before thousands of fans in the auditorium of Freedom Hall, Kentucky, President Trump said that the negotiation of NAFTA is going to be “very easy”.

During the act, Trump avoided any statement on the investigation that James Comey, director of the Federal Bureau of Investigation (FBI), announced on Sunday to find out if Trump’s campaign had ties with Russian officials to influence the 2016 campaign.

“With the renegotiation of NAFTA, a commercial exchange of more than 500,000 million dollars per year between the two countries is at stake,” said Dr. Alejandro Diaz-Bautista, economist, national researcher at Conacyt, as well as research professor at the College of the Northern Border (Colef). 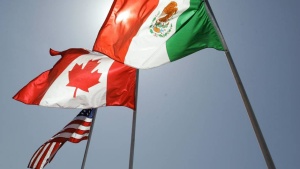 In the renegotiation of NAFTA, regional economic integration must be given impetus through the rules of origin, which can be achieved and is something that can be worked without a major crisis. The big problem is that it is not known for sure what the government of Donald Trump pretends.

The new US President, Donald Trump, seeks to create more manufacturing jobs, revitalize American industry through protectionism and leave behind a 20-year trade relationship to suit his interests. As President-elect, he threatened automotive giants like Ford, General Motors and Toyota to invest in the United States. The first two canceled investments in Mexico and moved operations to the neighboring country, even before Trump took office.

The US Constitution gives Congress powers to regulate trade with other nations, but the President still has wide powers to impose restrictions on trade with Mexico, including the limits of the current NAFTA.

Renegotiation will focus on so-called “rules of origin”, which determine the content of local products required for duty-free trade.

The three largest US auto companies account for one-third of the vehicles produced in Mexico. Therefore, there would be considerable resistance on their part to severe trade measures.

Mexican wages are low against global standards, and while this does not mark differences in productivity, it will continue to be an important incentive for companies to move unskilled jobs to Mexico, even to serve markets outside NAFTA.

Finally, in more than 22 years of the agreement, the value of trade between the three participating countries went from US $290 billion to US $1.1 billion, which means a growth of more than 265%.