The North American Free Trade Agreement (NAFTA) is an international agreement that came into force in 1994, with the main objective of establishing the rules governing trade and investment in Canada, the United States (US) and Mexico. NAFTA has created the largest free trade zone in the world. For over 20 years, NAFTA has served as a tool for increasing wealth and trade competitiveness among member countries. The main advantages of NAFTA to member countries have been the elimination of tariffs and the ease of investment of companies.

According to the NAFTA website (http://www.tlcanhoy.org), trade and investment levels have increased in North America and have generated strong economic growth, creating jobs and a greater variety of consumer goods at better prices. NAFTA has benefited businesses, consumers, families, workers and farmers in the region. Merchandise trade among NAFTA members has tripled, reaching US $946.1 billion in 2008, and trade between Mexico and the US has quadrupled. 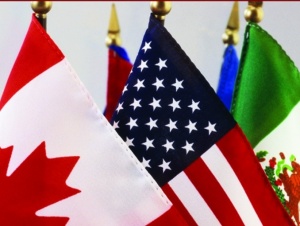 NAFTA has been a trilateral agreement designed to facilitate trade and investment between Canada, US and Mexico. The Treaty has respected the unique cultural and legal framework of each of the three countries and has maintained its sovereignty and independence. However, the current US administration has considered that this trade agreement has been the cause that millions of US manufacturing jobs have been lost since it came into force in 1994.

The current US administration believes that NAFTA has caused the loss of jobs in the US, and assures that American companies in Mexico must pay the Value-Added Tax (IVA) of 16%, while Mexican companies have no similar tax in US.

For these reasons, President Donald Trump in different press releases has stated his intentions to depart or renegotiate NAFTA, in pursuit of his campaign promises for the American people. The US president is the first president to seek the renegotiation of NAFTA since its entry into force in 1994. On May 18 of this year, the US Trade Representative Robert Lighthizer announced to the US Congress his intentions to renegotiate NAFTA, and has work since then on the objectives of the renegotiation.

The Trump Administration will seek better trading conditions for the US, fair conditions for all American citizens, improving access to the manufacturing, agricultural, and services market in Canada and Mexico. In addition, the objectives include negotiating the addition of a chapter to NAFTA that regulates the digital economy, incorporating and strengthening labor and environmental obligations. Likewise, the US government will work to eliminate unfair subsidies, practices that distort the state-owned enterprise market, and heavy restrictions on intellectual property.

Since May 2017, the Office of the United States Trade Representative (USTR) has conducted consultations with Congress, stakeholders and the general public to define the objectives of the NAFTA renegotiation. The USTR has received public comments, and for three days has held public hearings for the development of NAFTA negotiation objectives.

According to the Bipartisan Congressional Trade Priorities and Accountability Act of 2015 (TPA), the USTR must release the negotiation objectives at least 30 days before the formal negotiations. The USTR indicated that negotiations will begin no earlier than August 16, 2017.

The objectives of the negotiations by the Trump administration are to apply the highest standards covering the widest possible range of goods and services to ensure free and fair trade, to support better paid jobs and economic growth in the U.S. Therefore, it will be the task of the other NAFTA member countries to negotiate in the same conditions for their country to seek free trade, to support the jobs and economic growth of Canada and Mexico.

It is important to be aware of the NAFTA negotiations between the governments of Canada, the US and Mexico. Governments will have to reach a negotiation that benefits all its members, since the implementation of NAFTA in 1994, will be the first time to seek to renegotiate the terms of the trade agreement. Each country should negotiate in favor of the interest of their country, assessing what has been fruitful of the trade agreement and what needs to be modified or updated. In that sense, we must find the positive side of these negotiations, trying to evaluate the treaty, assess how it has worked for all member countries, measuring their advantages and disadvantages, seeing the negotiations as an area of ​​opportunity for all, to seek the best for all members of NAFTA.

-Editorial Every day, Jason Amavisca goes to his office in El Centro, California where he …