NAFTA is essential for the United States, Canada and Mexico’s economy and national security 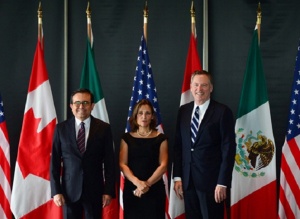 There is enthusiasm to reach an agreement with NAFTA.

“The security and economic interests of the United States depend on the partnership of NAFTA with Canada and Mexico when sharing the borders of North America,” said Dr. Alejandro Díaz-Bautista, an economist and national researcher at Conacyt as well as professor at the College of the Northern Border (El Colef).

The rise of protectionism throughout the world is an easy political narrative that plays on people’s fears about the future and their jobs, but can be alleviated by creating trade pacts that guarantee better labor standards and quality of life.

If NAFTA is eliminated, cooperation with North American neighbors will be less likely to happen, weakening our ability to face security challenges.

In order to shield the economic and security interests of the United States, collaboration is needed with the nations with which it shares borders. While contributing to economic development, NAFTA has established a framework of trust among the three members.

Trump has also intensified trade negotiations by linking the suspension of US steel and aluminum tariffs for Canada and Mexico to a successful renegotiation of NAFTA.

“We are renegotiating NAFTA, we have seen on the part of the President that he is excited to reach an agreement,” Trudeau said during a round table, adding that Canada continues to work on resolving trade negotiations.

The negotiators will meet in the United States for an eighth round of talks in April. The presidential elections in Mexico in July have added some urgency to reach an agreement.

Finally, trade between Mexico and the United States exceeds two billion dollars a day and our country is the main customer of North American products worldwide.

One of the main objectives of NAFTA is the increase in trade and investment, through the elimination of tariffs (that is, taxes on the importation of goods) and non-tariff restrictions, such as quotas and taxes, as well as permits to imports among others.