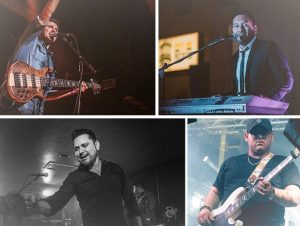 The Arizona band members were joined by Rubén Hernández and Leo “Papo” Neblina who were going to perform at their: Mana Tribute.

For those that attend local events in Imperial Valley, Ruben Hernandez was someone who performed with his guitar and sang at different events while people enjoyed the gathering. He was known and loved by friends and colleagues.

Hernandez was a local musician that inspired many to pursue a career in music. Many people were shocked to learn about his death but also remembered him as a mentor. He was invited to many events by local politicians and organizations since his music was well-received and had a great following in the Imperial Valley. He was a friend and a person you wanted to talk to, humble and friendly.

“I will always admire your work and the way you were. Just today I was thinking about you,” Ed Flower, leader of the group “La Chambita” wrote on his Facebook.

Hernandez collaborated with Beyond Borders Gazette on a couple of occasions. Most notably on its first anniversary in Calexico and on the first book presentation of the publisher, Ellie Burgueño.

The group’s bus hit a block of ice and rolled over. They were on their way to perform at the United Wireless Arena in Dodge City, Kansas.

Ricardo Madrid and Andres Sandoval were set to perform in Los Chicos del 512: The Selena Experience.

On their Facebook page, the group Los Esmiths stated:

“It’s with great sadness we announce the passing of our singer Ruben Hernandez.

He brought joy, energy, and love to the crowd. He filled our hearts with every performance he gave.

All current and former members were given the gift of having him in our lives. We became brothers, we love him, and we will forever miss him.

Rest in heaven brother, and sing your life.”

There will be a benefit concert on November 26 in memory of Ruben Hernandez. All proceeds from this show will go towards his family for the funeral expenses. The event will take place at The Vibe Event Center located at 721 Main Street, in El Centro.

A GoFundMe account has been created to help with the funeral expenses. https://www.gofundme.com/f/loschicosdel512?sharetype=teams&member=23396831&pc=fb_co_campmgmt_w&rcid=r01-166897684627-9c625360691311ed&utm_source=facebook&utm_medium=social&utm_campaign=p_lico+share-sheet&fbclid=IwAR2lPU2y8pyOqDwq4E1Tj-m7xmyPlS9d02cSYLbVWe79vJvFU2p6a8Dfi2g&mibextid=Zxz2cZ