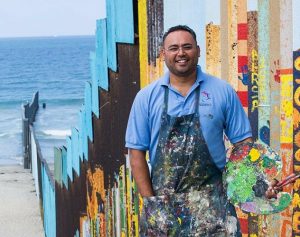 Millions of people migrate to the United States each year in hopes to have a better life. The journey, however, is not easy and it’s filled with challenges, hunger, and sometimes discrimination. But as those migrants reach Tijuana, Mexico near the border, they will see a mural that brings hope and can be to be a reflection of what humanity can be.

Enrique Chiu is the creator of the Brotherhood Mural on the USA/Mexico border wall and is the largest social and cultural movement in northern Mexico. This art plastered has inspired people from all over the world to come to add to the hope and support for the migrant community. Hand in hand with the Mexican muralist, around 4,000 artists from all over the world have come to the beaches of Tijuana to make their contribution. He has been a muralist for 22 years and had worked closely with migrants throughout his career.

“When migrants come to this area they will see this mural. People from all over the world come and help paint the mural leaving positive messages, prayers, and goodwill,” Chiu said.

The talk of a border fence and border wall has been a subject of the political divide in recent years but for Chiu, the border can be a symbol of unity and hope by converting that lifeless steel structure into a colorful mural of art thanks to the support of many volunteers.

“This mural shows how art can send a message and highlight the importance of human rights for migrants,” he added.

He is the only artist with permission from the US government to paint on the border wall between Mexico and the United States.

In 2018, thanks to the ‘Mural de la Hermandad’, Chiu was a contender for the Guinness Book of Records, as it would be the largest outdoor mural in the world.

According to Chiu, the mural is a poetic response to immigration policy and a symbol of the union between the two countries.

Doctor Honoris Causa, with degrees in Marketing and Design and Audiovisual Arts from the universities of Long Beach and Santa Ana, California.  His pictorial work has been exhibited in galleries in Mexico, USA.  Europe, the Middle East, and South America.  His work is permanently exhibited in museums in the United States, Spain, Germany, Guatemala, and Mexico.

Recognized by the JCI (Junior Chamber International) among the 10 most outstanding young people in the world TOYP 2019 in Estonia.  Artist of the Walk of Fame in Tijuana.

Named by Global Quality Awards “Inspiring Leader of the 21st Century”, TEDx Speaker 2019 Tijuana.  Kybernus National Finalist, Social Leadership 2021. Award “Mexico in your hands” in the Chamber of Deputies and “Presea Ray Tico” in the Chamber of Senators of CDMX., 3rd Mexican recognized by JCI International / United Nations Organization, Named “Man of the Year” by the International Honoris Causa Foundation in CDMX, Director of the International Festival “El Principito”, Producer of Documentary “A World without Walls”.  Director of the national program “Proyecta Cultura Mx”.

Director International Foundation EC for a childhood with a future A.C., Ambassador and spokesperson for the Civil Association Agenda Cero A.C., Official Spokesperson of the National Campaign “It’s Not Cool” of the Communication Council, Voice of the companies.  Director of Galleries “Chiu Gallery” Mexicali, San Miguel de Allende, Pasadena, California, and Tijuana.