Breaking News
Home / Education / MUNICIPAL PUBLIC SAFETY DIRECTOR IS RATIFIED AS A MEMBER OF THE ADMINISTRATIVE BOARD OF D.A.R.E. INTERNATIONAL

MUNICIPAL PUBLIC SAFETY DIRECTOR IS RATIFIED AS A MEMBER OF THE ADMINISTRATIVE BOARD OF D.A.R.E. INTERNATIONAL 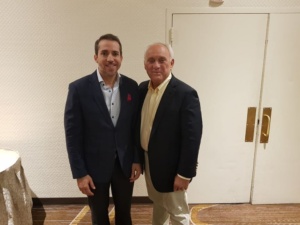 Mexicali, Baja California.- The Municipal Public Safety Director, Mr. Alonso Ulises Méndez Manuel-Gómez was ratified as a member of the Board of Directors of D.A.R.E. International.

During a conference of D.A.R.E. International which took place last Sunday, June 23 in the city of Phoenix Arizona, the Municipal Public Safety Director was ratified as a member of the Board of Directors, and who was present at the board meeting along with the President of D.A.R.E International Frank Pegueros.

The Council of D.A.R.E. International is made up of 14 US police chiefs, being Mr. Alonso Ulises Méndez Manuel-Gómez the only member of Latin America that integrates such a prestigious committee, which directs the operations of D.A.R.E. in more than 50 countries worldwide, having presence in different continents, America, Europe, Asia, Africa, and the Middle East.

D.A.R.E. is the prevention program against the most influential addictions in the world, and in the municipality of Mexicali reaches 90% of schools, having the most benefit of this program preschool and elementary school children, as well as junior high schools and high schools’ students. In the same way, D.A.R.E. for parents is present in more than one thousand schools which are located in the municipality.

Without a doubt, it is a great distinction for both the Municipal Public Safety Director and the entire Police Corporation of Mexicali.