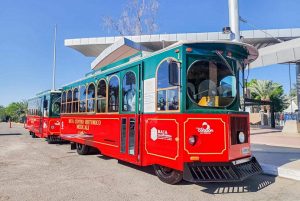 As a result of the coordinated work between the three levels of government, as well as the commitment to continuous improvement on the part of the tourism sector in Baja California, Governor Marina del Pilar Avila Olmeda reported that between January and September, 22.9 million visitors in the State, which represents a growth of 9.2 percent compared to the same period in 2019, the last year before the Covid-19 pandemic. The governor stressed that the Welcome to Baja California promotional campaign has provided the expected results, largely due to the follow-up provided by the Secretary of Tourism, Miguel Aguiñiga Rodríguez.

During the start of the Historic Center Route Trolleybus route, which was a transport route to promote the first painting of the city of Mexicali, especially in emblematic spaces such as the La Chinesca alley, Governor Marina del Pilar highlighted the efforts of the businessmen of the Historic Center for joining projects that seek to improve the experience of visitors interested in visiting the state capital. In the same sense, she shared that the Secretary of Tourism of Mexico, Miguel Torruco Marqués, informed that La Chinesca will be the first space that acquires the category of Barrio Mágico.

On the other hand, the Governor of Baja California highlighted that through support programs to strengthen micro and small tourism businesses, the State Government has applied an amount of 1,175 million pesos, which has been reinforced with training for a total of 1,130 tourism service providers. It should be noted that the arrival of cruise ships has also increased by 15.6 percent, already adding 222 so far this year.

Regarding the Trolleybus, the Governor of Baja California emphasized the coordination between the merchants of the Historic Center of Mexicali with the XXIV City Council headed by Mayor Norma Alicia Bustamante Martínez through the municipal delegate in said sector Rubén Chen, who highlighted that together with the Trolebús also opened two emblematic businesses in the area: Café Chinesca and Restaurant 19, which are part of the recovery of dynamism in a space that was abandoned for decades.

In this sense, the Coordinator of Public Spaces Regeneration Programs, Carlos Torres Torres, highlighted the will of the Mexicalense Chinese community to join in the rehabilitation of the Historic Center of the city, generating investments and collaborating with the State Government and the Municipal Government to achieve the recovery of an area that should become a synergistic point for national tourism.  It should be noted that this tourist transport route, which will have a length of 2.3 kilometers, will have women as drivers.