MORE THAN 200 PRESENTATIONS DURING THE 17 OCTOBER FESTIVAL 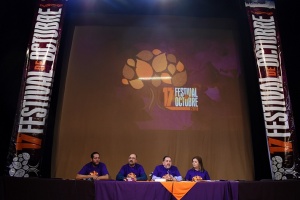 All over the State of Baja California, more than 220 cultural and artistic shows will be presented

For the first time, the Festival will arrive at Cereso del Hongo, state prison, in coordination with the SSPE

Mexicali, Baja California.- The State Government, through the Institute of Culture of Baja California (ICBC), officially presented the billboard that will integrate the 17th October Festival, with the participation of more than 170 artists and collectives in 225 events distributed throughout the State.

The Director of ICBC, Felipe Bejarano Giacomán, pointed out the importance of maintaining this cultural effort that brings together local, state, national and even international talent, with proposals of photographic exhibitions, concerts of different orchestras, dance exhibitions in their different disciplines, among others.

In addition to literature, painting, acrobatic dance and theater, he informed, the Festival will feature on this occasion the exhibition of folk music and dance from India, with the participation of Samandrar Khan Manganiar Rajasthani.

“We have scheduled more than 225 presentations which will be held throughout the State, of which 73 correspond to the discipline of music, 28 to the genre of dance, 43 of theater, 34 in the field of literature, 24 in plastic arts and multidisciplinary nature we will have three presentations, “he said.

The state official added that, due to the geographical situation of these activities, 68 presentations will take place in Mexicali, in Tijuana 33, in Tecate 46, in Playa Rosarito 28, in Ensenada 36; but also in San Felipe four events are scheduled, as in San Quintín and 2 in Valle de las Palma.

In this 17th edition, he highlighted the innovation of bringing the October Festival to the Hongo State Jail, in coordination with the Secretary of Public Safety of the State (SSPE), taking place directly at the Social Readaptation Center (Cereso), with three events.

Bejarano Giacomán highlighted the participation of local artists, from the various disciplines, which total 143, and with the support of the Ministry of Culture, 46 national and 15 international artists will arrive in Baja California.

Examples of some of the first activities already confirmed include the Celso Piña concert, the theatrical performance Aeroplanes, with the performance of the first actors Ignacio López Tarso and Manuel Ojeda, as well as Roberto Sosa with “A man, a woman and a dog “, The Moonlight or aerial dance workshops with acrobats from Las Vegas and Circo Soleil.

For more information on this and other activities, as well as the events of the Institute of Culture of Baja California, visit the website: http://www.icbc.gob.mx and the social media on Facebook / Cultura BC.