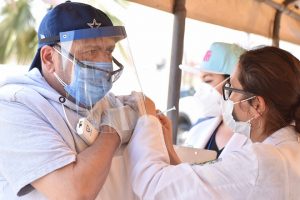 More than 126 thousand vaccines were applied on the second day of the COVID-19 vaccination day in people 18 years of age and older in Baja California, according to the 9:00 p.m. cutoff, shared by the Secretariat of State Health.

The immunization day would continue on Friday night with modules enabled in Mexicali, from 8:00 pm to 1:00 am, in order to advance and achieve the goal of applying in a period of 10 days, a total of one million 350 one thousand doses of the Johnson & Johnson brand, to make Baja California the first entity with full coverage of all groups.

In the morning, during the live broadcast of Governor Jaime Bonilla Valdez, the Secretary of State Health, Alonso Óscar Pérez Rico, emphasized that last Thursday’s day was historic, since the goal was to apply 122 thousand vaccines, however, exceeded the figure and placed more than 200 thousand units

He showed an aerial image taken from the high-efficiency vaccination center at “IMOS”, in Tijuana, where a considerable number of people are shown in a flowing line;  this site, he said, has more than 60 vaccinators.

In Mexicali: The FEX, Ciudad Deportiva, Military Camp 23 Motorized Cavalry Regiment and the UABC (Faculty of Languages ​​and Pedagogy).