Judge Negrete is well known in the community. She is an active member of the community serving on numerous nonprofit organizations and community service boards. Negrete is a Kiwanis member and also sits on the Board for Court Appointed Special Advocates (CASA-Imperial County) and the El Centro Library & Community Service Board. Negrete is the MANA de Imperial Valley Board President, CUHS Band Boosters President, and Citizen’s Oversight Committee – Measure K Chairperson. She is a member of Kiwanis in El Centro. Negrete is a former attorney coach for the Vincent Memorial High School Mock Trial Team and served as a volunteer judge for the ICOE Annual Migrant Speech and Debate Competition. 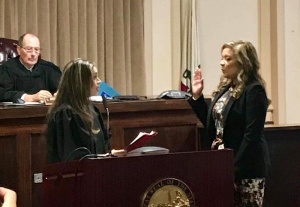 “Arriving to this day represents for me a life of dedication to my career, of effort, but more than anything it represents some other little girls like my daughter, like my neighbor’s daughter, my friend’s daughter, or your daughter who can see themselves equally in the future, not as judges, but as professional women, as independent women. Yes, I have a wonderful family, but at the end of the day I also want to see myself as an independent woman and I want other girls to have the strength and ability to see themselves like me or to be seen by people like Judge Ruth Bermúdez Montenegro and Judge Eran Marie Bermúdez, and to say: “if they can, I can too, said new Judge Monica Lepe-Negrete to Beyond Borders.