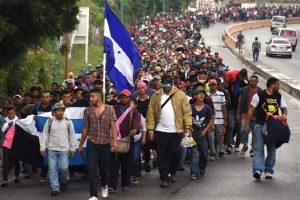 -Cutting Aid to the Region Would be Counterproductive

Washington, DC—Since October 12, a caravan of over 1,600 Hondurans, including women and children, have been traveling towards Mexico and the United States. Members of the caravan are currently in Guatemala, with plans to cross into Mexico in the coming days. According to research and advocacy group the Washington Office on Latin America (WOLA), the caravan highlights both the dangers that are pushing many people to flee their home countries, as well as the risks they face on their journey north, which has prompted them to travel in a large group.

Apprehensions of Central American migrants at the U.S. border have steadily risen in recent months, demonstrating that even harsh policies such as family separation are not deterring people from seeking protection and a better life in the United States.

“For these migrants, the idea of being separated from their children, or being locked up together, is horrifying, traumatic, and incredibly painful, but the alternative—staying home and risk being killed—is worse,” said Maureen Meyer, WOLA Director for Mexico and Migrant Rights. “The countries of Honduras, El Salvador, and Guatemala are among the most violent countries in the world, and most people have nowhere to turn for help because the police are not up to the task. If a gang is extorting you, if you are a witness to a crime, if you have an abusive partner, you have two options, stay and pay the price, or flee,” said Meyer.

Upon hearing news of the caravan, President Trump threatened to withhold all U.S. assistance to Honduras. For 2017, the United States allocated over $182 million in assistance to the country, including for economic growth, violence prevention, and good governance.

“When serious human rights violations took place in Honduras after a contested election and a temporary aid suspension could have had a positive impact on security forces, the United States did nothing. Now, when the migrant caravan underscores the humanitarian need in the region, President Trump’s threat to cut aid can only be counterproductive,” said Adriana Beltrán, Director for Citizen Security at WOLA. “Ending assistance across the board to Central America would undermine efforts to address the push factors of migration,” said Beltrán.

“While there is a mixed flow of economic migrants and asylum seekers, everyone should have the right to make their case before immigration authorities in the United States or in Mexico,” said Meyer. “Both governments should give them that chance and not apply a cookie cutter approach. Everyone’s story is different, and some people are in real danger,” said Meyer.

For his part, President-elect Andrés Manuel Lopez Obrador announced an unpublished work visa program in Mexico, in a way to try to contain Central American migration to the United States. During his government, which begins on December 1, last Wednesday before Honduran immigrants arrived in Mexico, he promised that work visas will be given to Central American migrants who wish to remain in the country.