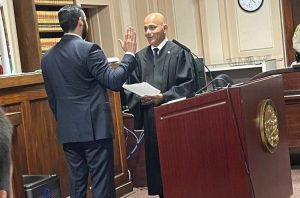 Michael Domenzain’s career in the law has been filled with success and honesty and this journey has led him to become an Imperial County Superior Court Judge.

Domenzain officially took oath on Sept. 30 in an enrobing ceremony where friends and family attended to celebrate the new judge.

Michael Domenzain, 40, was appointed to serve as a judge by Governor Gavin Newsom in August. Domenzain has served as a Referee at the Imperial County Superior Court since 2018.

“I just hope I can do good for the community. The only thing you can promise is to be fair and unbiased and neutrally look at each case,” Domenzain said. “The biggest part of this job is to have a good temperament and making sure that everyone that comes before leaves knowing that they were listened to, appreciated and that they were able to get their side of the story.”

He served as a Deputy District Attorney at the Imperial County District Attorney’s Office from 2009 to 2018 and was an Adjunct Professor at the University of Phoenix from 2014 to 2020. Domenzain earned a Juris Doctor degree from the Thomas Jefferson School of Law. He fills the vacancy created by the retirement of Judge Juan Ulloa.

United States District Judge Ruth Bermudez Montenegro spoke at the ceremony and shared how she saw his growth as a lawyer and deputy district attorney and his passion for the law. Montenegro had known him for 15 years and met him when he interviewed for a substitute teacher position at El Centro Elementary School District.

“As a lawyer, he was top-notch, professional, and it was always a pleasure to have him appear before me. As a standout lawyer, it was no surprise that Michael had aspirations to be a judge,” Judge Montenegro said. “The sky is the limit for Michael. He could name any legal position and place to practice law, but he chose to serve as Superior Court Judge in our community. Michael has a deep commitment to providing equal justice and access to all and he is passionate about making our community a better place for all. We are fortunate to have him.”