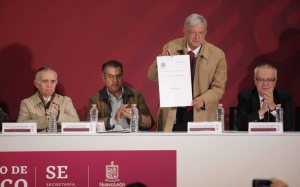 -Today, he presents a secretary of economy program whose headquarters will be in Monterrey, Nuevo León.

According to the Secretary of Finance and Public Credit, Carlos Urzúa, with such a decree, the state of Nuevo León will receive contributions of 11.4 million pesos or an increase of 15% in participations.

With this decree that will come into effect on January 1, 2019, the rate of Value Added Tax (VAT) will go from 16% to 8%; the Income Tax (ISR) will decrease from 30% to 20%. The minimum wage in 43 municipalities in the border area will be 176.72 pesos per day; and gasoline, diesel and electric rates will be homologated with the neighboring states of the United States.

Graciela Márquez, Secretary of Economy, said that the three columns of the program are innovation, market diversification and inclusion.

The benefited zone includes the municipalities that are located along the 1975.96 miles of the border with the United States from the dividing line and 15.53 miles inland from the territory, explained López Obrador.

The president also stressed that there will be a salary increase in the border region and reiterated his commitment to fulfill the promise to support seven thousand young people of the entity that will be trained in companies, the granting of 14 thousand scholarships to students of higher level education who have scarce resources, as well as the creation of a public university in the Anáhuac municipality.

In the presence of the governor of Nuevo Leon, Jaime Rodríguez Calderón (El Bronco), AMLO promised that the entire border between Mexico and the United States will be the largest free trade zone in the world.