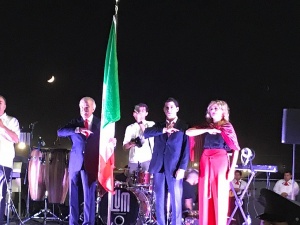 Mexican Independence Day was celebrated at Gran Plaza Outlets on Friday, September 14. This year, the event combined itself with the “Art Walk on the Border” that attracted thousands of people to the event to see the art and the fireworks show at the end.

The celebration was led by Calexico Consul General Carlos Flores Vizcarra proudly taking the Mexican flag and performing the re-enactment of “El Grito de Independencia,” the battle cry that launched the country’s fight for independence 200 years ago is celebrated yearly in Mexico and in every Mexican Consulate and Embassy around the world.

Consul Vizcarra spoke about the history of the independence and how it has continued its heritage to those that have migrated or raised in the United States.

“The message that the father of our nation, Miguel Hidalgo, made 206 years ago still resonates today, stronger than ever,” Vizcarra said.

Calexico’s celebration had the participation of multiple artists from both sides of the border, folkloric dancing, and a Luis Miguel Tribute Show. The ceremony of “El Grito” began with the U.S. Navy Color Guard presenting U.S. colors. Immediately, Consul Vizcarra was given the Mexican flag following military protocol.