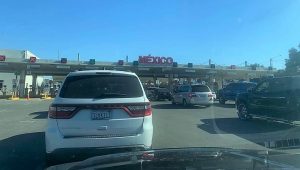 The Government of Mexico announced new restrictions for those who want to enter Mexico at the northern and southern borders, after one year of the implementation of non-essential travel restrictions.

For a year now, border restrictions have affected binational life as only American citizens and essential workers can cross into the United States. Now, the government of Mexico will be stricter for those who enter the country without having an essential reason to come.

This marks a new step for Mexico in its attempt to control the COVID-19 pandemic. The Secretariat of Foreign Relations announced the following on social media:

“To prevent the spread of #COVID19, Mexico will impose as of March 19, 2021, restrictions on land traffic for non-essential activities on its northern and southern borders. Additionally, the Government of Mexico will deploy sanitary control measures in the north and south of the country. Restrictions on non-essential traffic and sanitary measures will remain in effect until 11:59 p.m. on April 21, 2021.”

This week, the Secretary of Foreign Affairs Marcelo Ebrard said that the border would not be opened to non-essential travel until both sides of the border area in the green tier. This month also marks one year of the border restrictions between the United States, Mexico, and Canada. It was confirmed by the three countries that these restrictions will continue until April.