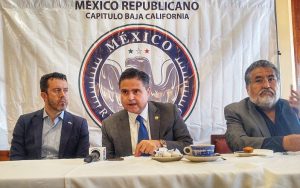 Mexico is known to have plenty of political parties to choose from but there is a new group that wants to have a voice in legislative affairs and not classify themselves as right or left.

The leaders of Mexico Republicano (MR), expressed the purpose of becoming the first binational political party between the United States and Mexico and are working to participate in the 2024 election. At the moment, they are trying to become a political party in the State of Chihuahua, Mexico.

But the formation of a new political party with ties to the American two-party political system is being questioned on how a foreign group can influence Mexican politics. Journalist Teodoro Renteria wrote:

“Dual nationality, of course, is a guarantee, so far everything is fine, what is not compatible is that it is a question of violating Mexican sovereignty and nationalism, as well as the entire social apparatus that our laws maintain.  It is also guaranteed that every Mexican has the right to create political parties, what is not correct is that in this new political institution or so-called party, influential politicians and foreign businessmen, particularly from the United States, participate and finance themselves.”

“We are a group of individuals, who as a group put our agreements before our differences. Pigeonholing ourselves in an ideological spectrum is the mere responsibility of those who judge it, since the only and prominent responsibility that we assume in Mexico Republicano as an organization is the public welfare for our nation,” the group described themselves on their website.

At a press conference in Tijuana, Association President Juan Iván Peña stressed that these are economic realities, since Mexico receives one hundred billion dollars between exports and remittances, a figure that needs to be doubled in the next 30 years since Mexico must be a qualitative partner.

He warned that Mexico needs to support serious capitalism since at present there is no full private property because there is no legal guarantee of property and it is the only way to detonate our economy and have quick money.

Peña Néder considered that the educational system should also be linked to the productive one because there are professionals who cost 10 million pesos without a job; generate development credit, with low interest, no more than 12 percent without asking for exaggerated guarantees.

He detailed the three priorities that MR in Baja California, first, be obliged to create a democratic culture, that “the grocery vote” does not proceed, that governments through the money they handle remain in power, and that the electoral law has not been able to solve.

The second, pointed out by the leader of MR, is the reality of the northern border, where North Americans respect the need for legal transit of temporary visas for workers who cross and take care that the Mexican government does not become a railway for other nationalities such as that of Central America, since the border is open and terrorists could enter.

The third, conceptual, without anyone giving up their nationality, promote integration, which is an economic advantage.

“Without money from the United States, Mexico is unviable; without the Mexican workforce and the installed capacity, the Americans lose their first commercial partner”.

For his part, Gricha Raether Palma, general secretary and spokesperson for the Democratic Party in Mexico, stressed that in the United States they have the habit of grouping all Hispanics and Latinos into a single category, so it is important to clarify that Mexico Republicano seeks to privilege the rights and interests of Mexicans in that country.

Finally, Larry Rubin, MR adviser and representative of the Republican Party in Mexico, agreed that what unites both nations are not only traded, since there are almost 40 million Mexicans in the neighboring country and the two million North Americans who live in ours, for this reason, the only way is to work together, to achieve a stronger relationship.