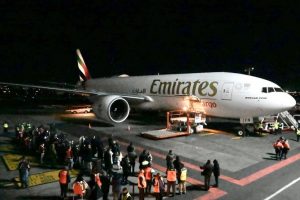 Mexico has received a shipment of 870,000 doses of AstraZeneca’s COVID-19 vaccine from India as the country prepares to prioritize older adults in the next phase of its vaccination campaign.

Mexico is also expecting shipments of the Pfizer-BioNTech vaccine to resume, with 494,000 doses due to arrive on Tuesday, Foreign Minister Marcelo Ebrard said during a news conference.

“We received the first shipment of vaccines against COVID-19 from India.  This morning, 870 thousand doses arrived out of a total of 2 million that will arrive from the Asian country. We are making progress in the National Vaccination Policy,” said Ebrard.

Mexico will next vaccinate adults above 60, a group representing 12 percent of Mexico’s nearly 130 million people, between February and April.

The country has so far received just 1,636,350 vaccine doses, according to government data, but has agreements for millions more, including China’s CanSino and the Russian Sputnik V vaccines.

Mexico was also in talks to host part of a phase III clinical trial for a Cuban COVID-19 vaccine, pending authorization from health regulator Cofepris, Ebrard said, adding he hoped it would happen “very fast.”

Mexico is trying to secure as much vaccine supply as possible amid delivery delays and a surge in cases. Mexico’s death toll from COVID-19 was 156,579 on Friday.