Mexico Needs a Radical Change to Its Policy to Take Advantage of The USMCA: Gina Cruz 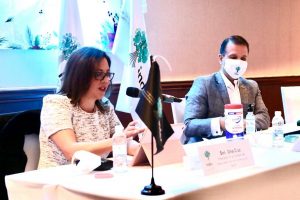 Baja California Senator, Gina Andrea Cruz Blackledge, said that Mexico must take a radical turn in its policy, to take full advantage of the Treaty between Mexico, the United States and Canada (USMCA), and move from improvisation and the use of institutions capriciously, to established strategic planning.

The president of the North American Foreign Relations Commission of the Senate of the Republic, participated in the Ordinary Meeting of the National Council of the Maquiladora and Export Manufacturing Industry (Index), chaired by Luis Aguirre Lang.

Gina Cruz stressed that it is necessary to take advantage of the potential that the USMCA offers, to build an economic legacy and national heritage for the new generations.

“The current government must change as soon as possible because with its actions, each time it is causing more harm than good.”

It should bet on strategic planning instead of being based on improvisation, on plurality instead of closure, said the Senator for Baja California.

“The USMCA forces us to open ourselves to competition and improve our public practices in favor of international trade and the strength of our productive sector.  Today, faced with the worst pandemic in a century, we have the challenge of attracting investments from the world to the North American region and mainly to our country.”

She pointed out that an opportunity like this will not return, because investments and projects that do not occur in Mexico will take place in other countries or in other institutional frameworks such as the recently signed Regional Comprehensive Economic Association, which is a free trade agreement and the largest in the world by the size of their economies, which include China, Japan, Australia, Korea.

In the environmental field, Cruz said Mexico is going in the contradiction of what the USMCA orders, and this can cause serious problems in the relationship with their commercial partners, who could go to international bodies in the face of unilateral measures such as cancellation of renewable energy projects.

Compliance with the Law, what the Americans call “The Law Enforcement” is crucial for the Mexican State to have full credibility with the other parties to the treaty, but today the law and the institutions are used in a capricious and biased way to persecute opponents and reward the loyal ones.

For a successful implementation, it is essential to give certainty to investors, respect contracts, and enforce the rule of law.

However, all of this has been violated in Mexico with the cancellation of projects such as the New International Airport in Mexico City or the Constellation Brands plant in my state of Baja California.

With these actions, Mexico is driving away investments and causing great annoyance among entrepreneurs in the countries of the region.

“Open and transparent governments are needed, that give certainty of their actions and that have clear and defined objectives and goals.”

But the federal government has insisted on improvising and betting on investment projects lacking transparent and clear guidelines, without environmental impact or cost-benefit studies.

Today, about 80 percent of government purchases are direct awards or restricted invitations, which generates opacity and corruption.