Mexico Faces the Challenge of Rebuilding Its Relationship with The United States: Gina Cruz 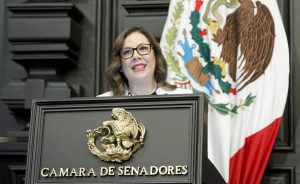 Baja California Senator, Gina Andrea Cruz Blackledge, said Mexico faces the challenge of rebuilding its relationship with its northern neighbor, the United States, before the arrival of the new administration since they are the main commercial partner but Mexico has sent messages of uncertainty.

The president of the North American Foreign Relations Commission of the Senate of the Republic, pointed out that the relationship the Mexican Government has established with the new administration of the United States did not start well since President Andrés Manuel López Obrador did not recognize immediately the triumph of Democrat Joe Biden, over Republican Donald Trump, in the last presidential election.

This is where the new Mexican ambassador to the United States, Esteban Moctezuma, will have the challenge of rebuilding the relationship between the two countries, especially concerning migration and security, when in the latter there was a reform in this regard, in which it puts US agents assigned to Mexico are at high risk.

A sensitive issue is the release and exoneration of General Salvador Cienfuegos, by the Attorney General’s Office (FGR), as well as the disclosure of the confidential file against him by the Government of Mexico, which caused the disappointment of the Department of Justice of the United States, and puts at risk binational cooperation in matters of security.

Gina Cruz explained that trade and economic development is another of the pending issues since the López Obrador administration has sent messages of legal uncertainty, lack of rule of law, that does not contribute to creating a good climate for investment or business.

“Many of the investments from our most important trading partner, which are from the United States and Canada, are fleeing because there is no legal certainty. We expect Mexico to comply with the approved laws.”

“It is not possible that an environmental agreement has been signed in the USMCA and that the construction of a refinery in Dos Bocas, Tabasco continues, and that we want to follow a scheme from the seventies, in which the environment is polluted and the door is closed to clean energy.

“We hope that President López Obrador can understand what foreign policy is and know that the dynamics of this new relationship will be different from the one he had with President Donald Trump.

“We hope that there will be intelligence, common sense, openness and, above all, the spirit of diplomatic work that has to be done for the benefit of our compatriots living in the United States, and especially in commercial matters when there is a treaty that Mexico has already signed which Canada is also part.”

Gina Cruz explained that Mexico has been adopting very different policies from Mexico, United States, and Canada (USMCA) treaty, so there needs to be a review of public policies that are being dictated, such as economic issues, border security, immigration issues from the southern border, as well as environmental policy, which is something that Democrats are very concerned about.

It is in environmental matters where the Democrats pushed for the realization of a modifying protocol in the negotiation of the USMCA, Mexico had to make reforms in labor matters, as well as the environment, surely the new president of the United States will be very looking closely that these reforms are implemented.

Gina Cruz said President Joe Biden’s health plan will be different from that of his Republican predecessor, as well as those that have been implemented in Mexico, so surely this policy will affect the decisions that are taken in the country.

The assault on the Capitol, that took place on January 6, was the unfortunate result of years of dividing and confronting, of disregarding the truth and building conspiracies until the last moment, the Senator said.

Trump had announced that if he lost the election he would argue fraud, but few believed his statements would have such an important effect on his supporters. The assault on such a representative institution is a true reflection of the damage that populism can inflict on the fabric of society, said Gina Cruz.

Mexico and the world need to learn the lessons of what a presidency that encourages confrontation, violates norms, and generates resentment and hatred can mean.

“Today, during the worst pandemic in more than a hundred years, decency, moderation, speaking the truth, and adherence to laws and institutions must characterize governments so that they become aware that the taking of the Capitol was also a sign that, in politics, we must never take for granted that democracy exists per se, but that it must be cultivated, nurtured and protected every day.”