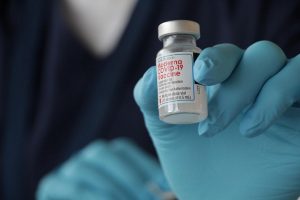 Mexico is going through its most critical time since the beginning of the pandemic as a major surge of infections and deaths is overwhelming the country.

Mexican health authorities have said that both confirmed cases and the overall death toll likely represent a significant undercount due to the lack of widespread testing.

Mexican President Andres Manuel López Obrador said during his daily press conference on Jan. 8 that the Omicron variant is “a little COVID,” noting hospitalizations and deaths had not increased at the same rate.

Mexico passed 300,000 test-confirmed coronavirus deaths last week, but so little testing is done in the country that a government review of death certificates puts to real toll at almost 460,000, according to the Associated Press.

But not everything is bad news. The U.S. company Moderna donated 2.7 million doses of the coronavirus vaccine to Mexico Saturday.

Mexican officials welcomed the arrival of the shipment at the airport in Toluca, just west of Mexico City, and said the vaccines will be used to inoculate teachers.

Teachers in Mexico were second after only health care workers to be vaccinated in the spring.

This purchase brings the U.S. government’s confirmed order commitment to 500 million doses including 110 million doses expected to be delivered in the fourth quarter of 2021 and 90 million expected to be delivered in the first quarter of 2022. Moderna has supplied more than 217 million released doses of the vaccine to the U.S. government.