The Trump-AMLO meeting was about the trade agreement, the economy, and also about politics. Mexico and the United States recognize the progress that the two countries have made toward a renewed and strengthened relationship, prepared to face the economic and security challenges of the 21st century in the North American region.

“The meeting of the two presidents commemorates the entry into force of the historic Mexico-United States-Canada Treaty (USMCA), a free trade agreement that will strengthen global competitiveness as a region and will promote economic growth, employment and prosperity for the people of North America,” explained Dr. Alejandro Díaz-Bautista, an international economist, as well as a research professor at the Northern Border College (El Colef).

The pandemic created by the coronavirus COVID-19 has deeply affected Mexicans and Americans. 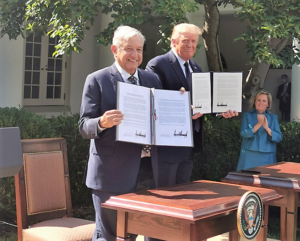 Mexico and the United States maintain close coordination as they respond to unprecedented economic, health, and security challenges. The two countries have limited travel since March 2020, for movement on the common land border of Mexico and the United States, at the same time that they have guaranteed the transit of essential goods and services, the continuity of supply chains and the displacement of emergency workers and those engaged in critical activities to mitigate the spread of the coronavirus in our nations.

Mexico became the United States’ largest trading partner for the first time in 2019.

The USMCA is the ideal instrument to provide economic certainty and greater confidence in our countries, which will be essential for the economic recovery that has already begun in both nations.

The USMCA reaffirms the shared understanding that North America is a region that creates prosperity for all of its citizens.

Finally, the USMCA marks the beginning of a new era that will benefit workers, farmers, engineers, and entrepreneurs from both countries, which are the backbone of the integrated economies of Mexico and the United States.