Mexicans Block Access to Mexico from US at Port of Entry 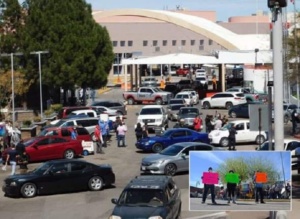 A group of residents of the city of Nogales, Sonora gathered to block access to people coming from Arizona with cars, as a demonstration act to demand Mexican border customs strengthen security measures and prevent any cross-border transmission of Coronavirus into Mexico.

The Coronavirus (COVID-19) has increased exponentially in the United States with more than 100,000 confirmed cases as of March 27. This is in contrast with what is happening in Mexico as 500 confirmed cases have been counted. Local residents are concerned that as cases on the U.S. grow it could spill into Mexico.

President Donald Trump issued a decree to partially close both the northern border with Canada and the southern border with Mexico, restricting crossings only to US residents and citizens, completely denying access to visa-holders under any circumstance.

The residents of Nogales who demonstrated at the international border, demand that a similar policy be established for those who enter Mexican soil. There have been similar protests in the border such in Tijuana where people also demanded the same action from Mexican customs.