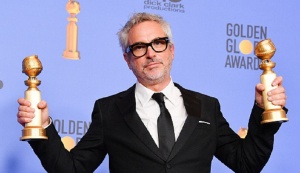 Shot in Spanish and white in black, ‘Roma’ is partly autobiographical and set in the 1970s, its story is about a domestic worker of indigenous origin who cares for the children of a middle-class family in Mexico City.

The film was awarded three prizes from the National Society of Film Critics – the best foreign language film, the best director and the best photography.

In addition, Alfonso Cuarón won the Golden Globe for best director for his film ‘Roma’.

Alfonso Cuaron who took the Oscar for best direction for ‘Gravity’ in 2014, thanked the Foreign Press Association of Hollywood, its collaborators and the actresses Yalitza Aparicio and Marina de Tavira that star in the film, as well as paying tribute to his family and his country of origin for his training and for creating him, said CNN.

“Thank you very much, Mexico,” said the filmmaker.

Speaking after receiving his two awards, the director said that it is the first film in which he embarked “without any fear and wishing to risk absolutely everything.”

He also acknowledged that he was very surprised to be nominated for the Golden Globe on this occasion since he had already received this award for ‘Gravity’.

During the awards, the candidates for best director, besides Cuarón, were the Americans Bradley Cooper (‘A star has been born’), Peter Farrelly (‘Green book’), Spike Lee (‘Infiltrate in the KKKlan’) and Adam McKay (‘The vice of power’).

‘Roma’ also opted for the Golden Globe for best script, but in the end, it fell to ‘Green book’, another great winner of the awards night.