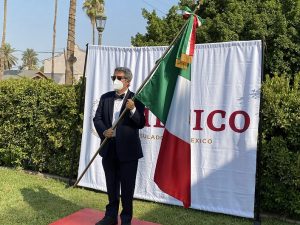 The Cry of Independence was given the morning of September 15, at the Mexican Consulate in Calexico by Consul General Tarcisio Navarrete Montes de Oca.

While the pandemic forced to cancel the traditional community event, the tradition was kept alive here in this border community. Calexico has celebrated Mexican Independence Day since the 1980s at Rockwood Park and Crummet Park. While this year you didn’t see families gathering to celebrate, the ceremony continued at the Mexican consulate.

It was a small ceremony but was done with the same pride for Mexico.

The Cry of Dolores occurred in Dolores, Mexico, on 16 September 1810, when Roman Catholic priest Miguel Hidalgo y Costilla rang his church bell and gave the call to arms that triggered the Mexican War of Independence.

Every year on the eve of Independence Day, the President of Mexico re-enacts the cry from the balcony of the National Palace in Mexico City, while ringing the same bell Hidalgo used in 1810.

The Cry of Dolores has assumed almost mythical status. Since the late 20th century, the event has come to symbolize Mexican independence and to initiate Independence Day ceremonies the following day (16 September).

Independence Day in Mexico is a patriotic holiday, marked by parades, concerts, patriotic programs, drum and bugle and marching band competitions, and special programs on the national and local media outlets.