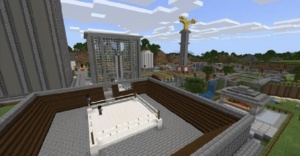 Four young Mexicali students from El Garage Project Hub, Department of Innovation of the Educational Group “16 de Septiembre” will represent Mexico in an international competition next Saturday, August 8, where they will face off against students from the United Kingdom to seek victory.

The competition organized by the North American School Electronic Sports Federation (NASEF), consists of exploiting their creativity and knowledge of construction and design through the educational version of the Minecraft video game, fulfilling a series of challenges that the expert judges in the area qualify.  The invitation to participate was received from the United States consulate in Tijuana, where they promote interaction and seek to get young people involved in the field of science, technology, and education; the students had to go through several stages and qualifying rounds to reach the grand final, designing game arenas, smart houses, superhero towers and even replicating Mexico City, where they could share a lot about culture and infrastructure.

Ricardo Villegas, Pedro Uribe, Gabriel Cardenas, and Alan Llanes are the participants who have the prestigious task of putting the country’s name high in this new field of educational electronic sports, all of them veterans of El Garage Project Hub, they belong to the Garage robotics teams such as Panther Robotics, Mexicali Robotics, and Innobotics, where on several occasions they have participated in national and international competitions and even a bronze medal in a robotics world championship held in Romania.

These talented Cachanillas are preparing for the next and last challenge on Saturday, August 8, starting at 10:00 am, and people can to tune in through the competition’s twitch channel: https://www.twitch.tv/insideparticipate, where the community can support them by voting for them at the end of the event and thus, they are one step closer to proclaiming themselves champions.