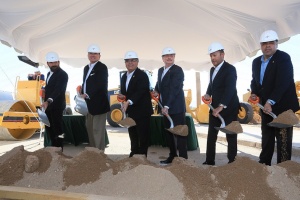 -With an investment of more than 120 million dollars, Medline Industries, Inc. starts construction of a plant in Mexicali that will generate more than 3 thousand direct jobs.

-It positions Mexicali as a national leader in the medical industry.

With an investment of more than 120 million dollars, on February 7 the first stone of the leading medical products manufacturing company in the United States, Medline Industries Inc, was placed in a groundbreaking ceremony headed by the Governor of the State of Baja California Francisco Arturo Vega of Lamadrid, the Mayor of Mexicali Gustavo Sánchez Vásquez and executives of the company.

The City Mayor in the 22nd City Council of Mexicali, Gustavo Sánchez Vásquez, welcomed the executives of the company, who chose to settle in Mexicali for being a city that has highly qualified human resources for a specialized sector as well as for having the infrastructure that allows complying in a timely manner with production needs.

“We welcome a world-class company, which represents the highest investment in its sector in the last three decades, which matches perfectly with what we have here: Academically prepared people, certified by highly prestigious institutions, with work experience to meet their expectations in quality and work disposition, “he said.

The mayor stressed that the decision of MedLine Industries is the result of progress in the construction of the Mexicali we want, with more order, cleaner, safer and open to economic development.

“It is a tangible example of how society, government and the private sector, coordinated together can develop international projects that benefit our community. So are on the right route, the one that we draw to have a better city and everything is thanks to the sum of the efforts of each one of us,” he added.

Sánchez Vásquez noted that in 2017, there was a 55% growth in private investment compared to 2016, representing an amount of 865 million dollars, which happended thanks to the confidence and vision of the business sector that recognizes in Mexicali a city with opportunities to grow.

For his part, Raul Carreras, Executive Vice President of the company said that this project represents one of the largest operations worldwide for MediLine Industries, making Mexicali its main manufacturing center.

He indicated that after a long selection process, the capital of Baja California was chosen as the ideal city for its operation due to its strategic location for future projects, skilled and educated labor as well as a stable and competitive work environment.