Mexicali Mayor Receives the Keys of the City of Calexico 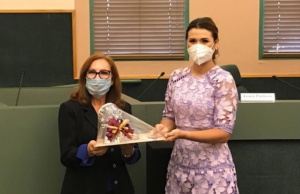 She received the keys of the city as a symbol of friendship between both cities, from Mayor Rosie Fernandez.

Mayor Fernandez thanked Marina Del Pilar for coming and visit them to make the relationship with both cities even stronger.

“We would like to reaffirm our sister cities agreement from 2017 so we can focus on areas such as the environment, economic development, and other specific areas that affect both of our cities,” Mayor Fernandez said.

Mayor Marina del Pilar thanked the city for their hospitality and highlighted the history of both cities and pledge to work together.

“We can’t understand the history of Calexico without Mexicali, and Mexicali without Calexico,” Mayor Avila Olmeda said. “Aside from our diplomatic sisterhood, we all know Imperial Valley and Mexicali are one community.”

Calexico and Mexicali have been sister cities since 1980 when they signed their sister cities agreement. In 2017, the sisterhood was reaffirmed by former Mayors Armando “Mandy” Real and Gustavo Sanchez Vazquez.